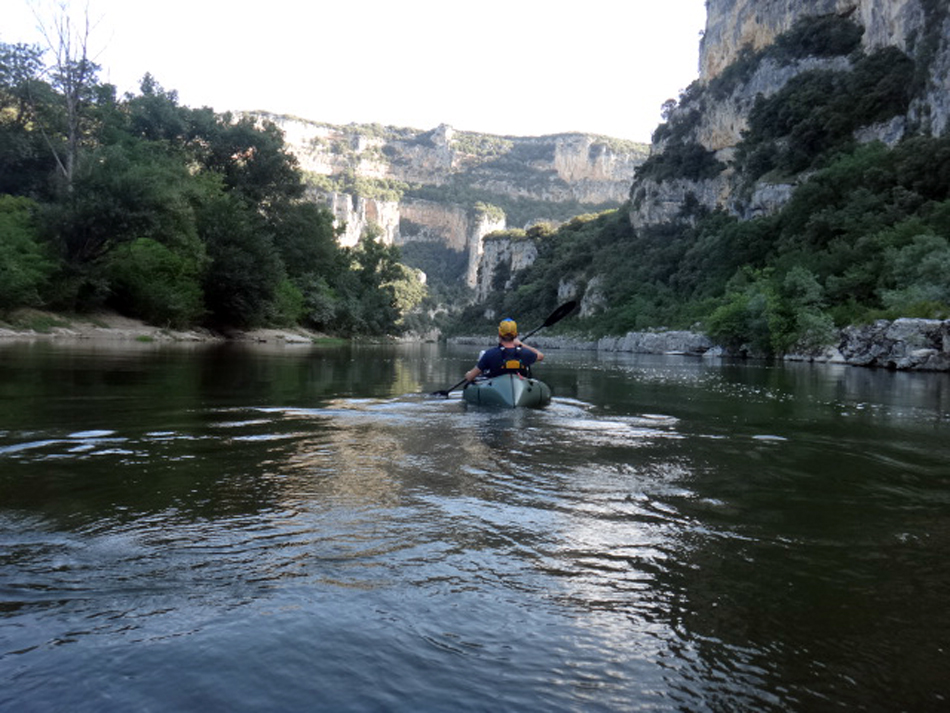 Travelling as a couple, sharing the adventures with your loved one is great. But the first step is to agree on which adventure to choose. 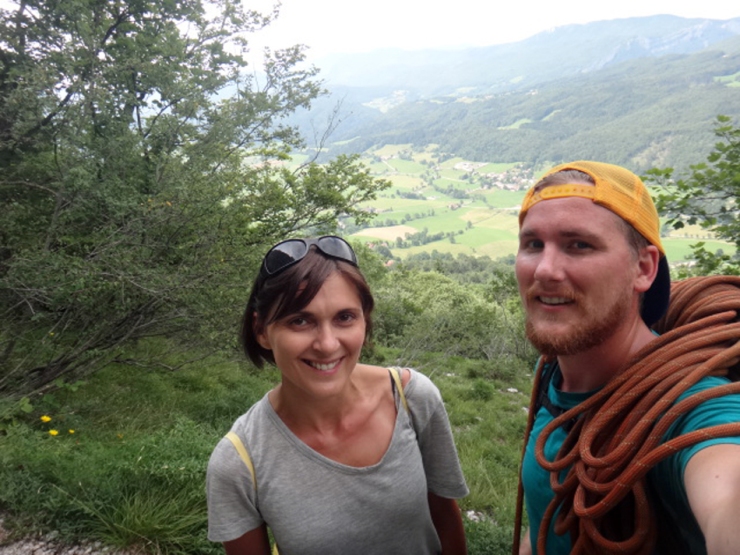 Summer happens just once a year and is a very short time compared to all the different things I’d like to do during these few weeks. You can’t fit everything in such a short time. I know that. But anyway I try to do or plan as much as I can during the two month summer break. The thing is, I’m not alone and even though Natasza agrees easily to let me go by myself, I absolutely want to do everything with her. And that’s the problem. We don’t understand the word « holiday » the same way. I know I’m the one with the weird point of view. For me « holiday » means you can book a flight to the most remote (and cold) place possible -possibly with bears-, push your limits, get tired, hungry, dirty and take some nice pictures of the amazing (and cold) places you’re at. Travelling as a couple usually doesn’t inclued any of that, well, maybe the nice pictures but that’s it. So when I come with an idea for the next destination, I better have a good point. But Natasza is great, she (almost) always agrees with my ideas and is happy with our trips. I am so greatful to have her by my side when we walk in bear country or climb some huge cliffs. Not because I need a partner, but because it’s her.

This summer, decisions were difficult to make. We first planned to go climbing in the Lofoten Islands but decided we had to improve our skills in trad climbing first to fully enjoy the experience. Then we decided to go to Chamonix Mont Blanc for mountaineering. I guess I’ve been a bit too enthusiastic about Chamonix and tried to fit too many things in a week’s time. The result was that I freaked Natasza out , plus the weather forecast was catastrophic (see how many people lost their lives in the Mont Blanc range this year). So we both agreed on a compromise : since I already booked the flight tickets to Geneva we would rent a car and and head south, to France, to the Ardeche gorges. The plan then was to do some climbing and to paddle down the gorges using our packrafts. It ended up beeing a brilliant idea and a glorious trip. Alright, it was not as remote as I’d like and way warmer than I can usualy take. But beeing with the loved one and sharing some good time together was priceless. Unexpectedly we also did some caving which was new to us.

We drove from Geneva to Vallon Pont d’Arc which is the starting point if you want to paddle the Ardeche gorges. To be honest it’s not the kind of place we’re fond of. Super crowded, tourist shops everywhere but also super convenient because you have everything you need (if you’re willing to spend big bucks). We climbed a 4 pitch route (6c) in the area with Guillaume from Grenoble before starting the descent of the river. 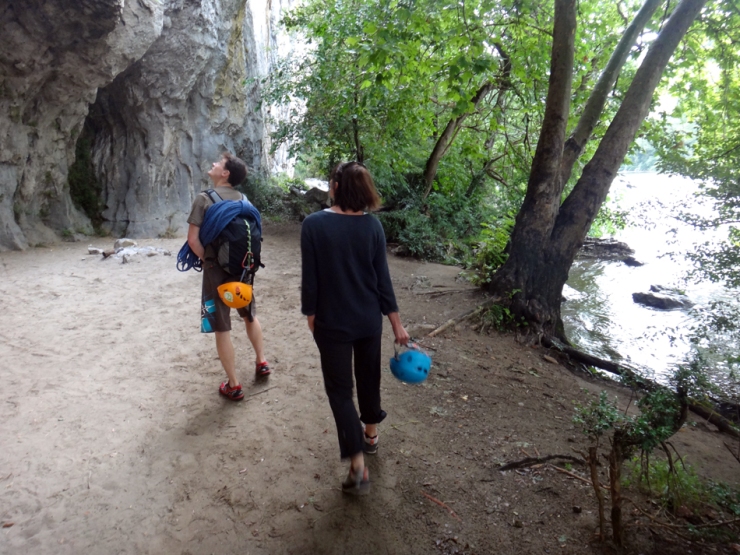 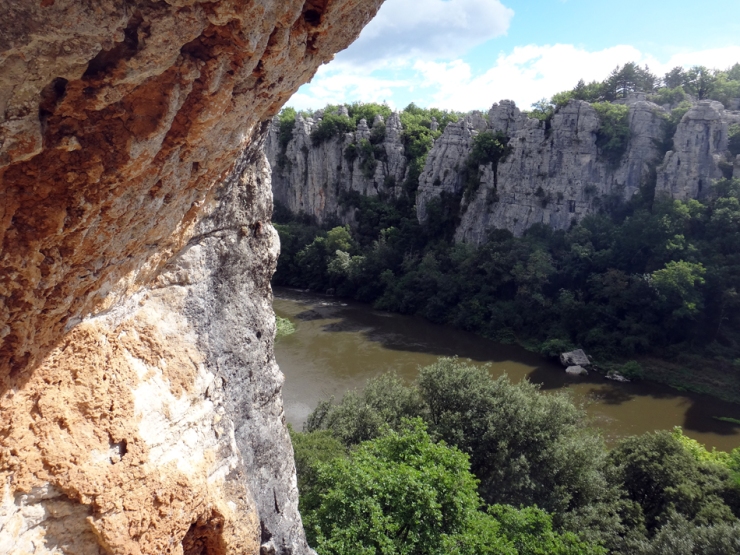 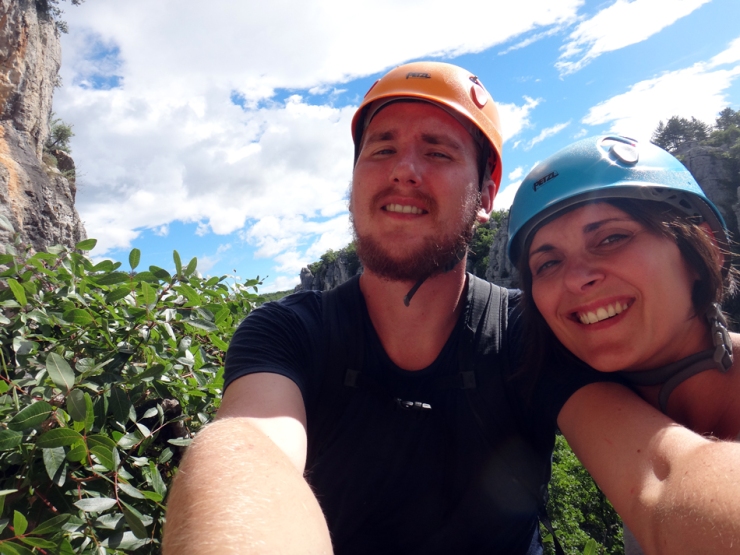 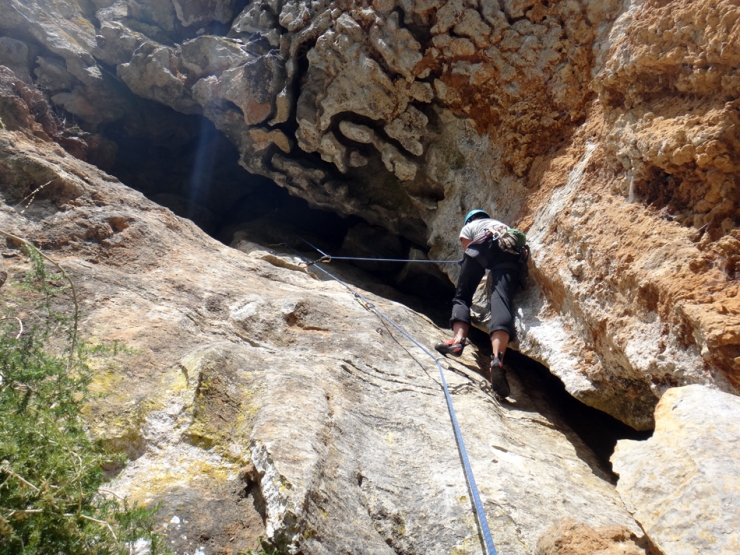 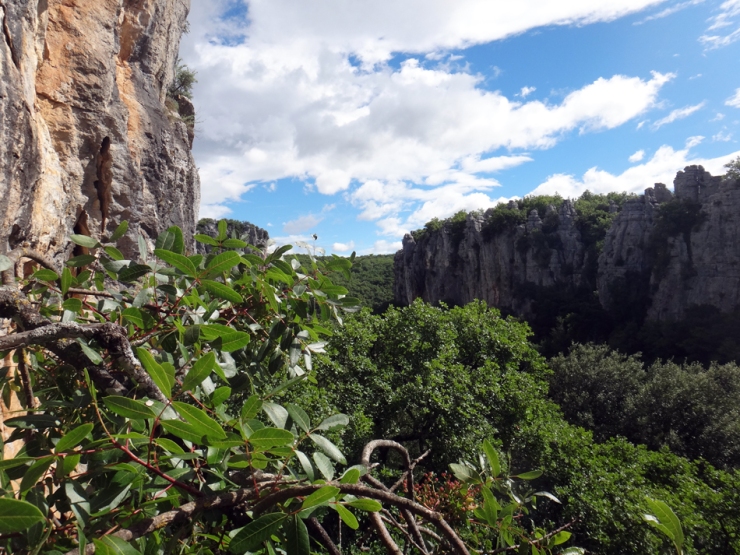 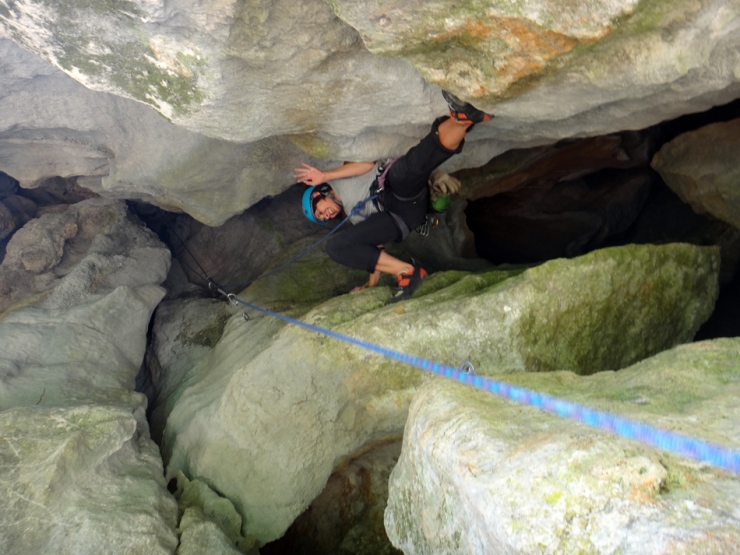 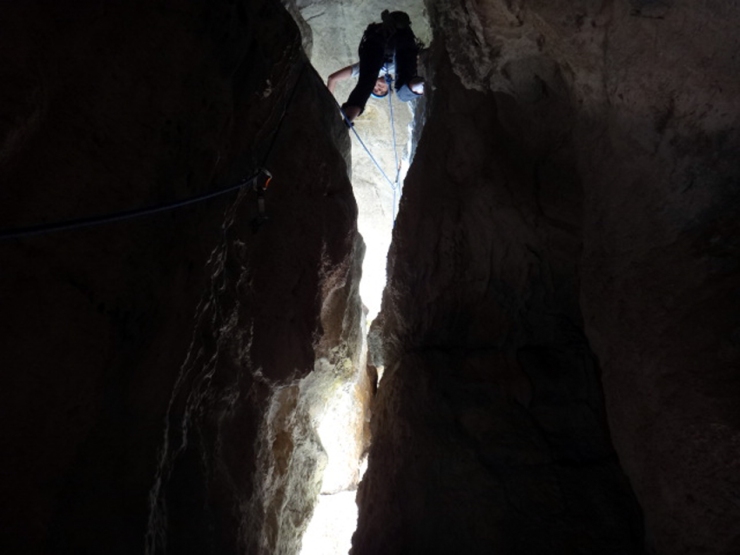 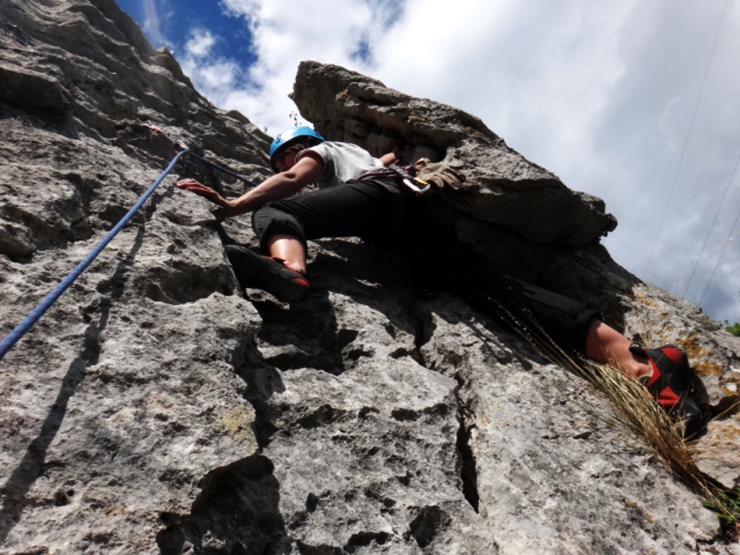 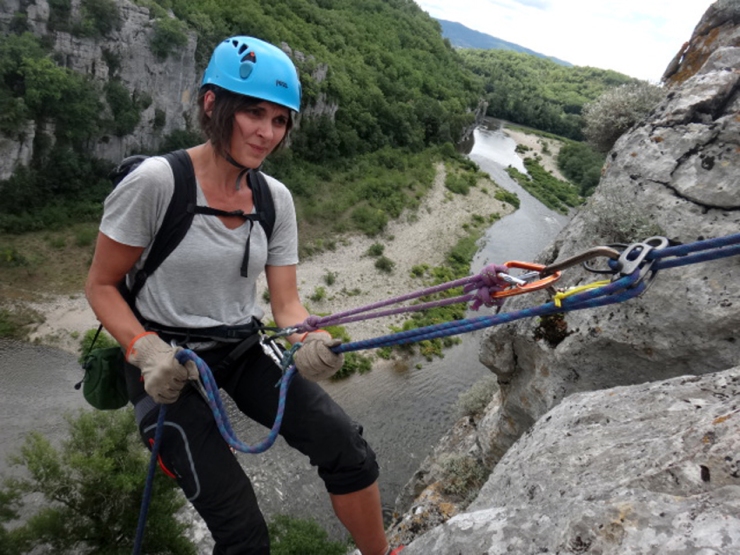 As said before we used our own boats, which is pretty unusual in the Ardeche gorges. All the people we’ve seen rented boats in Vallon Pont d’Arc. They all had the same kind of boat : something weird between a canoe and a kayak which didn’t seem to be very stable. The river has about two dozen of rapids in the gorge section, they’re graded up to class 3 which is not a big deal with a packraft but it can be pretty hazardous with the kind of vessel described above and zero white water experience- which is obviously often the case. We’ve seen A LOT of people capsizing (sometimes several times in a row) and I assume injuries might happen a lot.

The descent is very dramatic and the landscape epic. The start is awful though. Most people rent a boat by the hour and stay in Vallon Pont d’Arc so the beginning of the trail looks more like a traffic jam than a wilderness experience. But after a while you find yourself in the middle of a canyon, (almost) alone and then the magic eventually happens.

There are two campsites along the river and wild tenting is not permitted. You must book the campsite ahead. We did it and regreted our decision at some point : you can actually easily paddle the gorges in a day. But the second day of the descent we took our time and enjoyed the place, going ashore to jump in the water every once in a while. 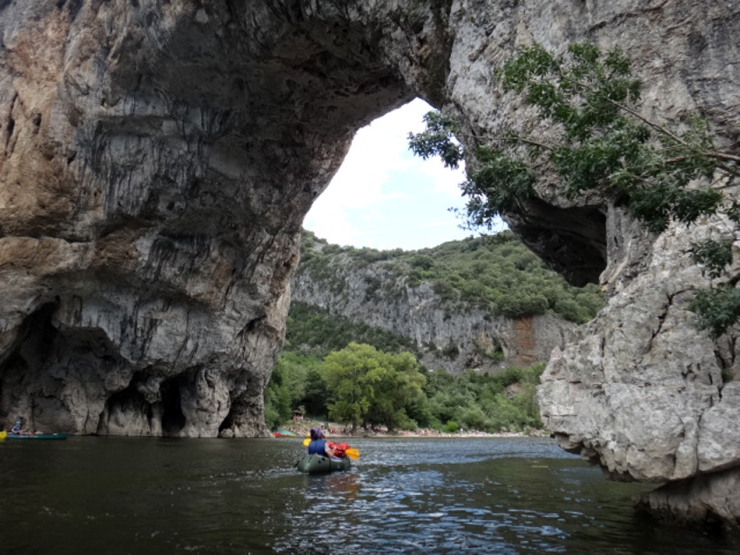 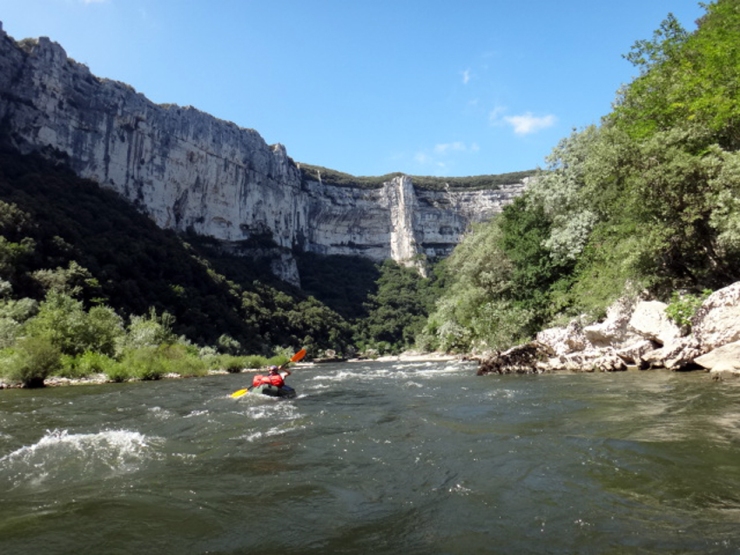 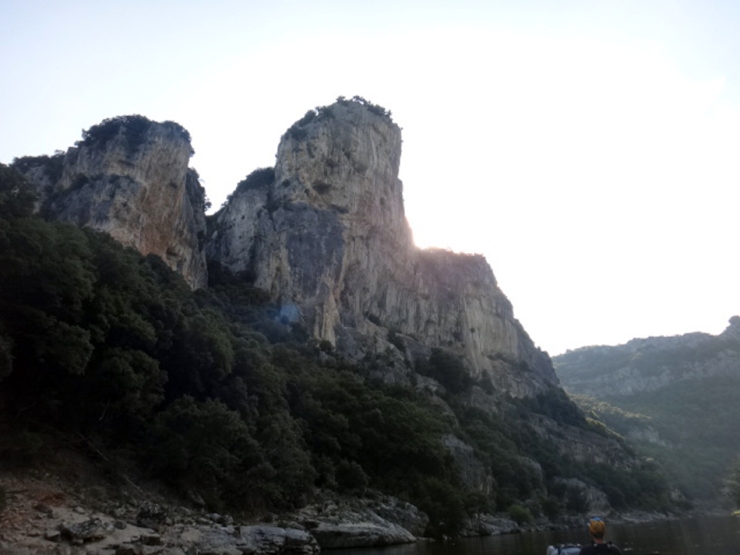 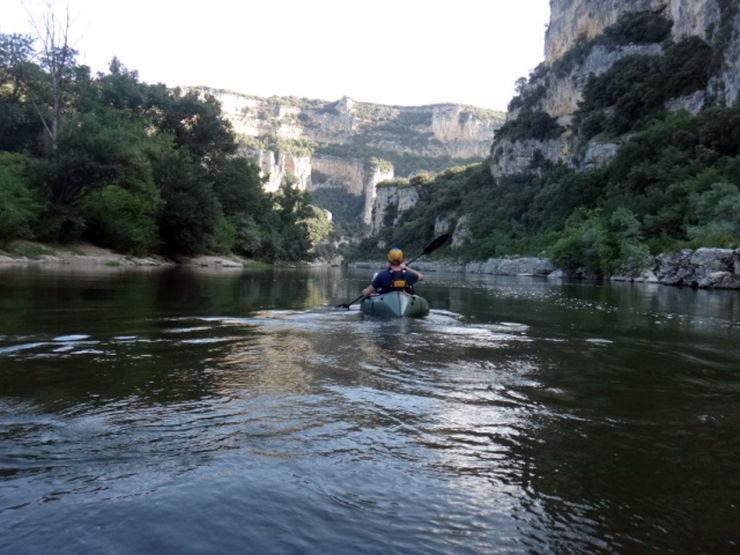 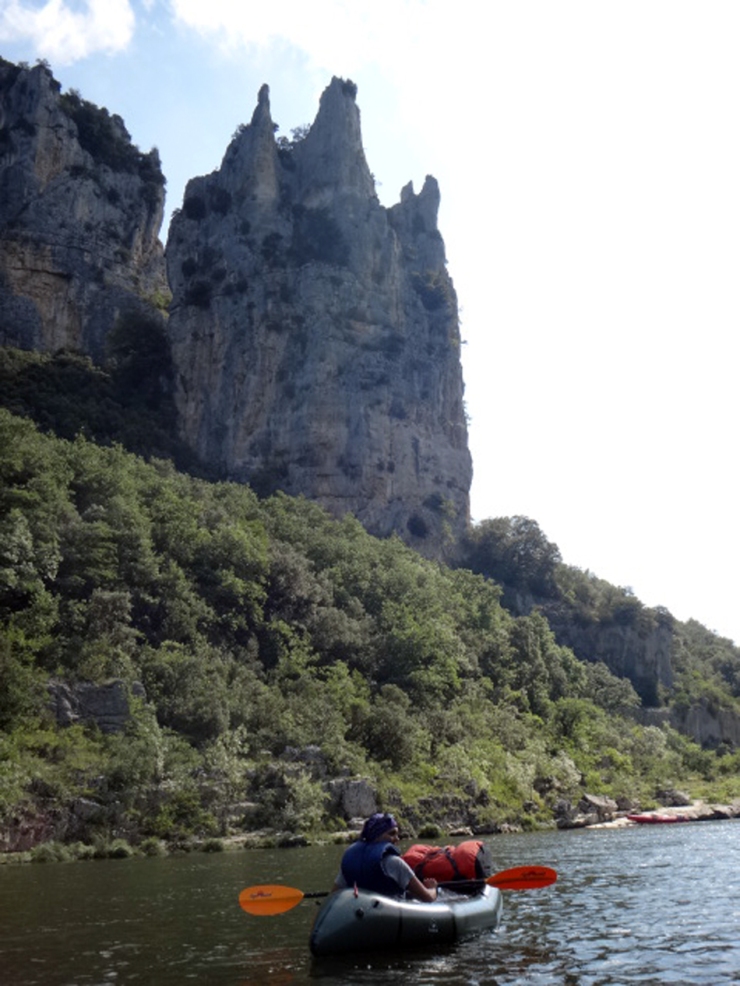 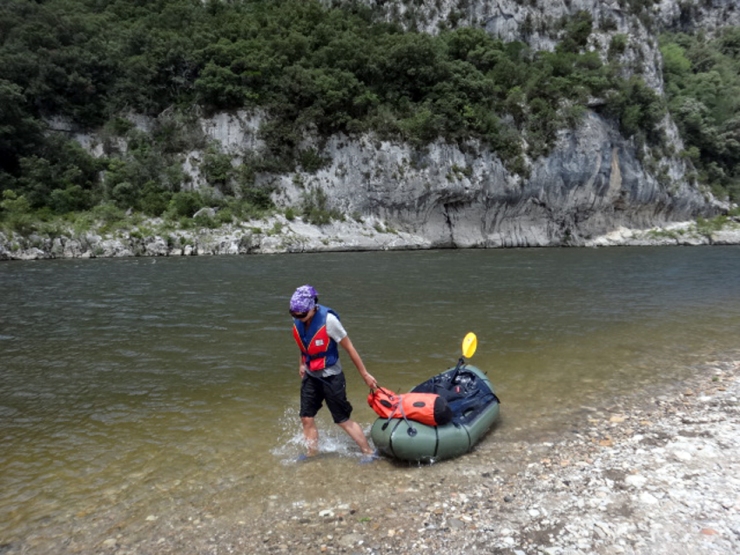 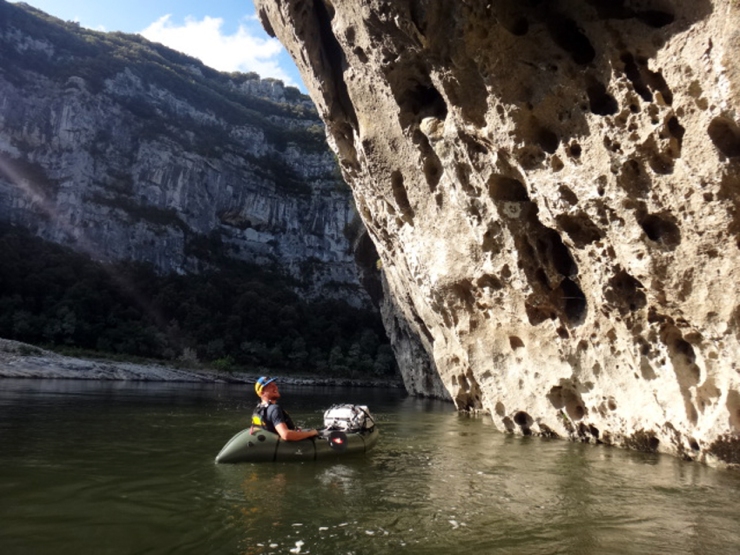 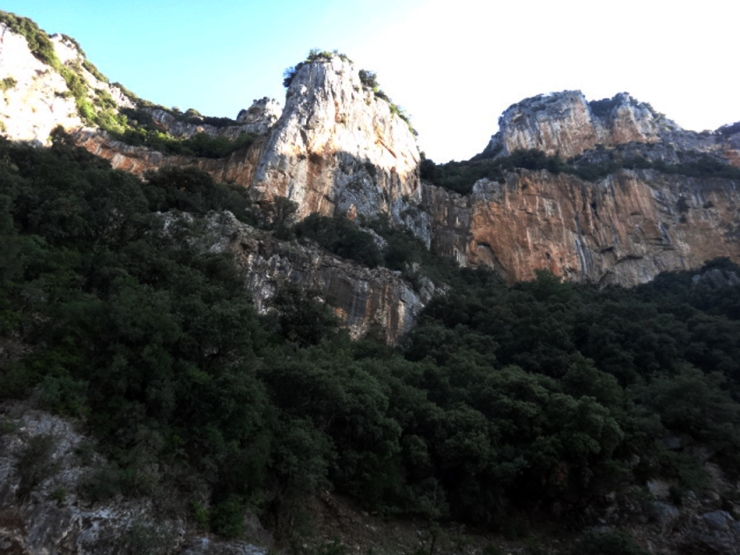 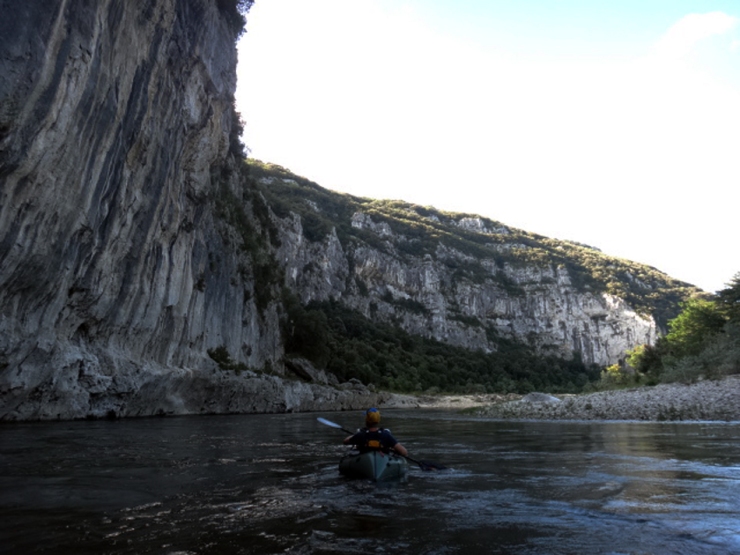 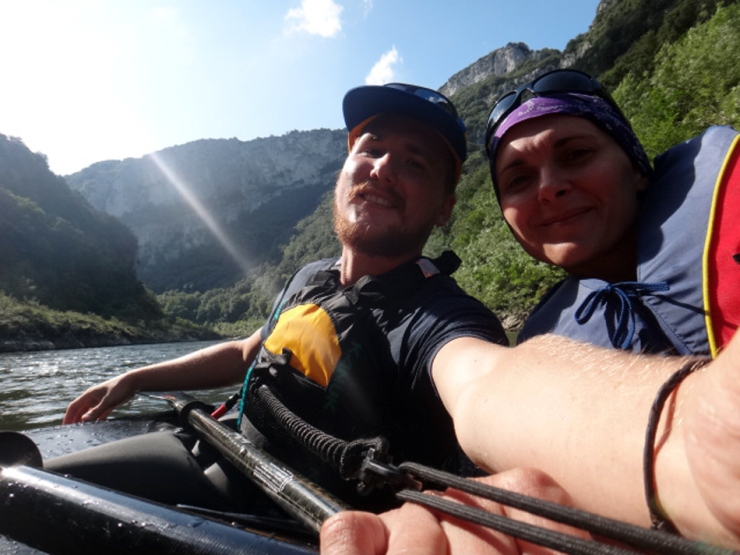 After several days in the Ardeche area, we got bored of beeing surrounded by the crowds and decided to retreat to the mountains. When we came from Geneva we drove through another region called Vercors, also known as pré-Alpes, which is a nice and wild mountain range. With no plans we headed to Vercors and felt in love instantly with the landscape. We spent a few days in the area and climbed an easy 10 short pitches route on a 200 meters cliff. During our stay in Vercors we met some helpful and friendly people including a french-nepalese couple who run a nice restaurant, where we highly recommend the food . Then we got back to Geneva to catch our flight back to Sweden. 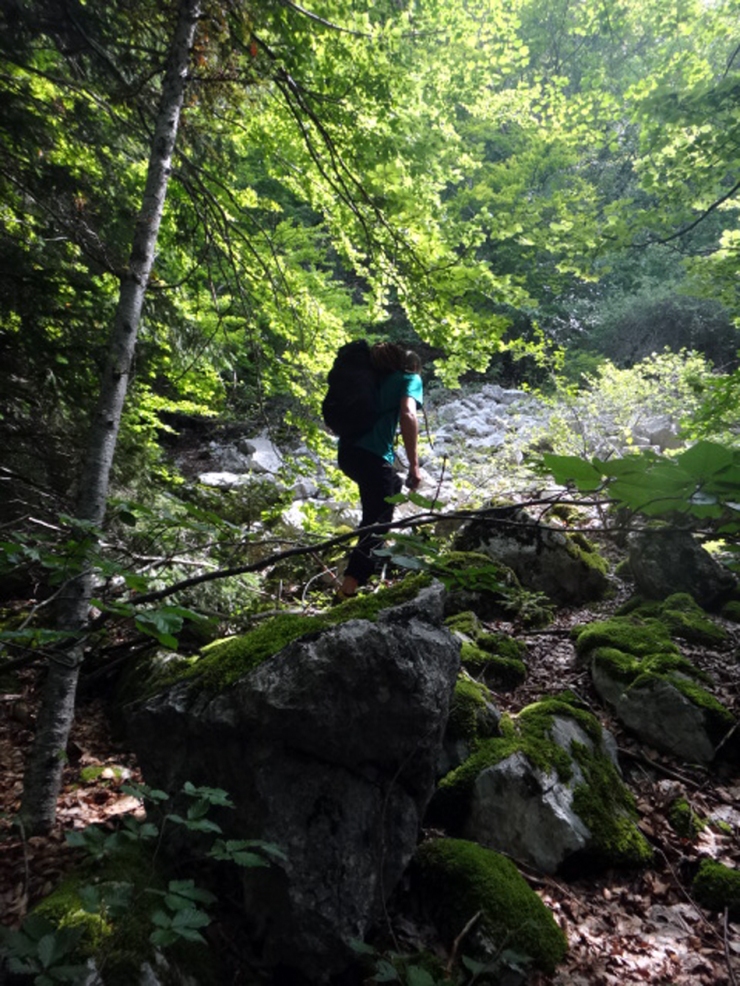 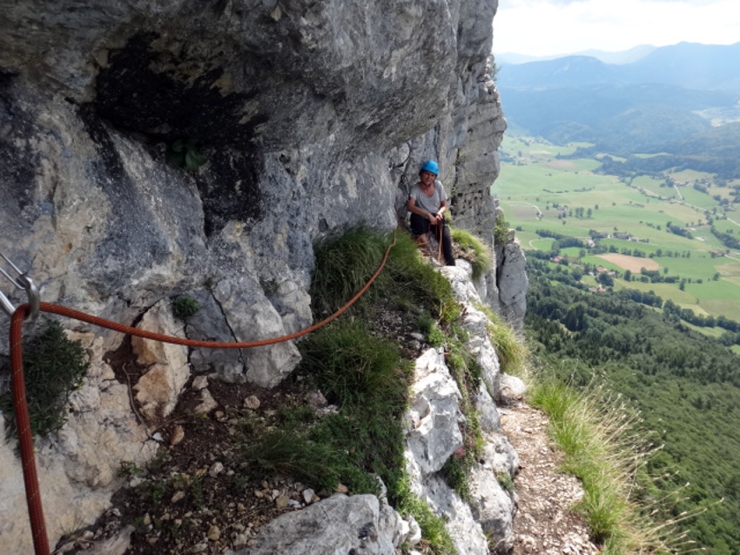 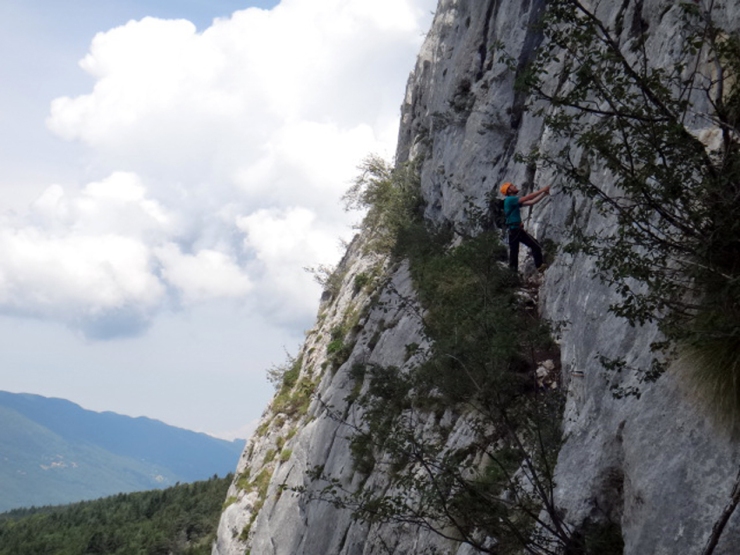 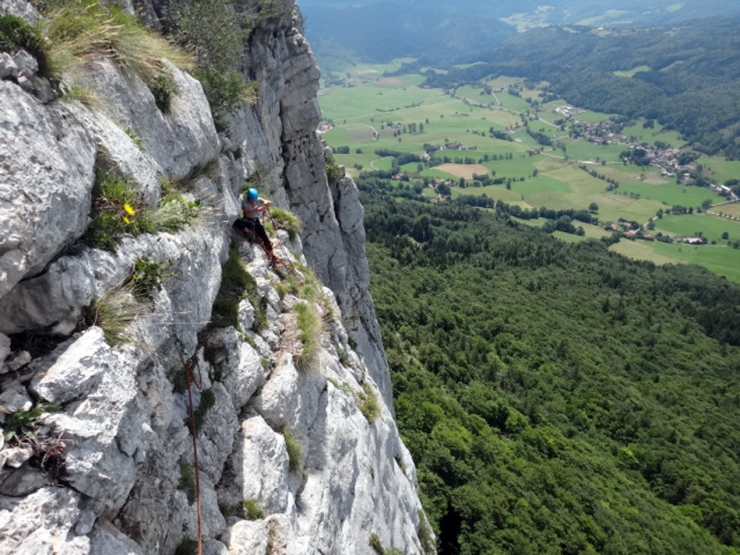 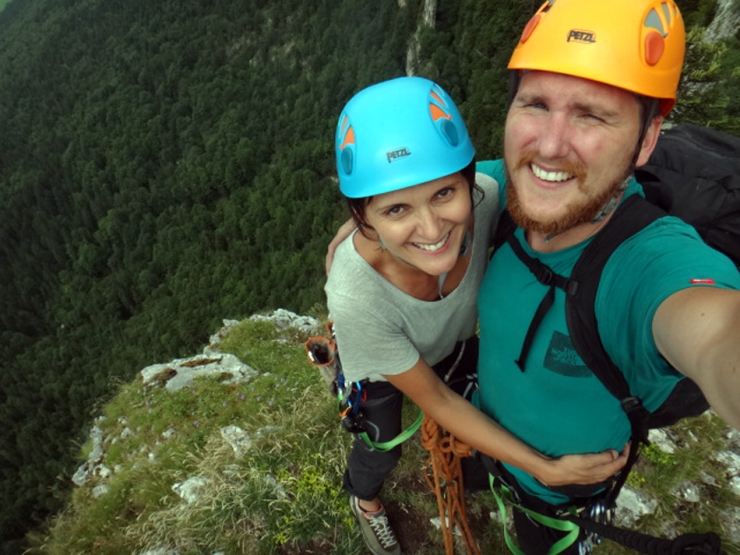 That was a good trip with everything one needs : amazing landscapes, good food, and love… I tell you what : our next trip to come is going to be tough, exhausting and dirty ! Can’t wait !