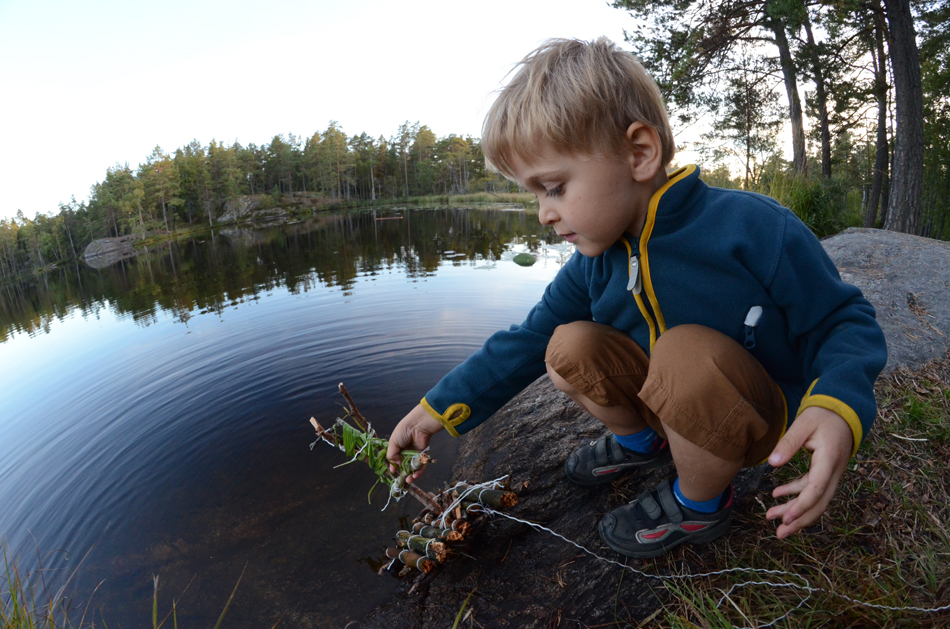 Giving the taste for nature to the next generation is something really important to me. Kant’s injunction that we do not do to others what we would not want to have done to us is true, so is its reverse: what is good for me is good for others. Hiking, camping, exploring and simply enjoying nature is a blessing. And if I find so much satisfation doing all those things, others can enjoy it too. Natasza has two kids, that makes me a step-father. I love it and I definitively want to show the kids a lot of fun things, nature upon others. Mathilde is 8 years old and Sasha is 4 and a half. Perfect time for the first steps outside the big city. But it’s not as simple as it looks. If you push too hard somebody doing something he/she is not use to do, then you can get the opposite effect. Slowly but surely is the best way here. Baby steps. 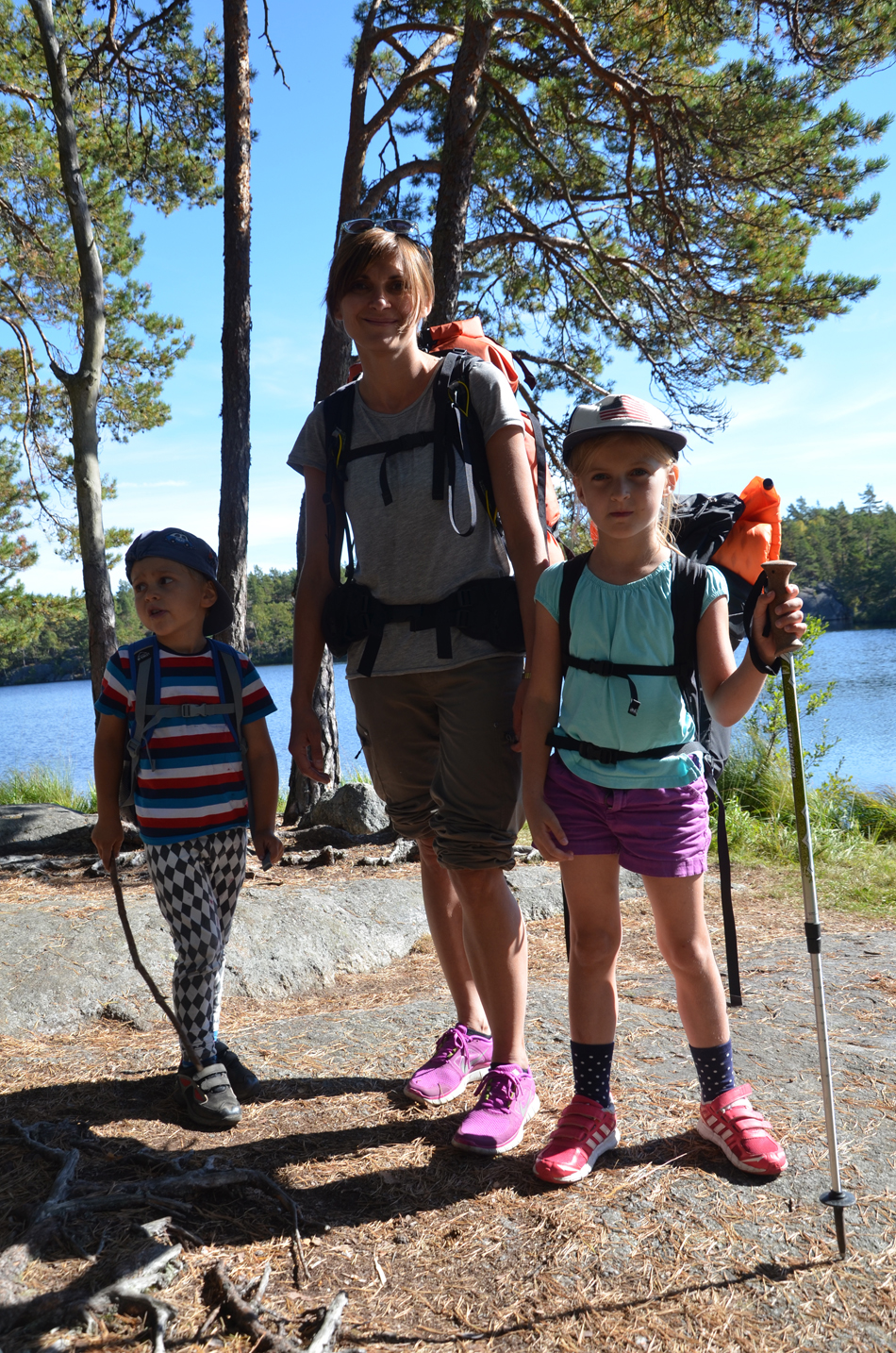 Since we live together, Natasza and I took the kids out for camping several times. They like it, but so far it’s not the most exciting stuff for them. It has to be fun. The hike to the campsite has to be short (or at least not too long). And the place has to be safe and to offer fun possibilities. We recently spent a weekend in the forest outside Stockholm, a place I love called Tyresta National park. The hike to the camp is about 3 to 4 kilometers, the first part is a bit lame with a large trail but after a while it turns into a nice little path. Some parts are a little bit challenging for little kids, but they love it: climbing boulders and walking between massive roots emerging from the soil. After an hour or so we made it to the camp. Here the real fun  begins for the kids. Setting the camp is something they love. They don’t help much yet, but knowing we’re finally there is enough for them: time to explore the suroundings. They feel home straight away and start  building things with sticks and logs, playing with the ducks from the lake and so on. It’s a great adventure every time.

Sasha enjoying a classic amusement for kids in the wilderness.

Mathilde is really proud of her knife.

On our previous overnight trips with the kids we used a single tent for the four of us. To be honest Natasza and I spent both shitty nights every time. We were using a Hilleberg Keron 3 with a large vestibule. The kids love this kind of tent because it’s massive and somehow looks like a little house. But it’s too small for four people, even if half of them are dwarf sized. So we decided to use two tents. We took our two lightweight tents: a Vaude taurus ultralight (which is not ultralight btw) and a MLD Duomid. We slept very well with room enough for the four of us. I slept in the Duomid with Mathilde who spent her first night in a tarp tent. She loved it.

Mathilde hits her bed in the Duomid.

Sasha emerging from the tent. Notice the plastic truck, he had the right to take it under one condition: to carry it himself.

What to carry, how to carry?

Going on an adventure with the kiddos is great fun, but since they’re still young, they cannot carry as much as we do. So here’s how we do:

Mathilde is 8 yo, she’s able to carry her own gear: her sleeping bag, her sleeping mat and her rain gear. So far she used an Arc’teryx cierzo 25 backpack. But it doesn’t really fits her back. I’m planning to build her a custom backpack.

Sasha is too young to carry like his sister does. But still he has to do his part. As mentioned above, he can take one toy with him, but he has to carry it himself. He’s still yong and not so used to camping, that explains the plastic toy. But to be honest, he barely played with it. Nature offers plenty of amusement, so no need for extra toys, especially a plastic truck… Apart from that, Sasha carries his rain gear. It has to be reachable anytime.

It leaves us -Natasza and I- a lot of things to carry: the two tents, Sasha’s sleeping gear and Sasha and Mathilde’s spare clothes plus our own stuff and the cooking gear. Thanks God, we are ultralighters!

Young kids can be tired sometimes (or pretend to be so), I have to carry Sasha sometimes, but not more than 5 minutes!

He doesn’t look very tired, does he? He a good actor though. 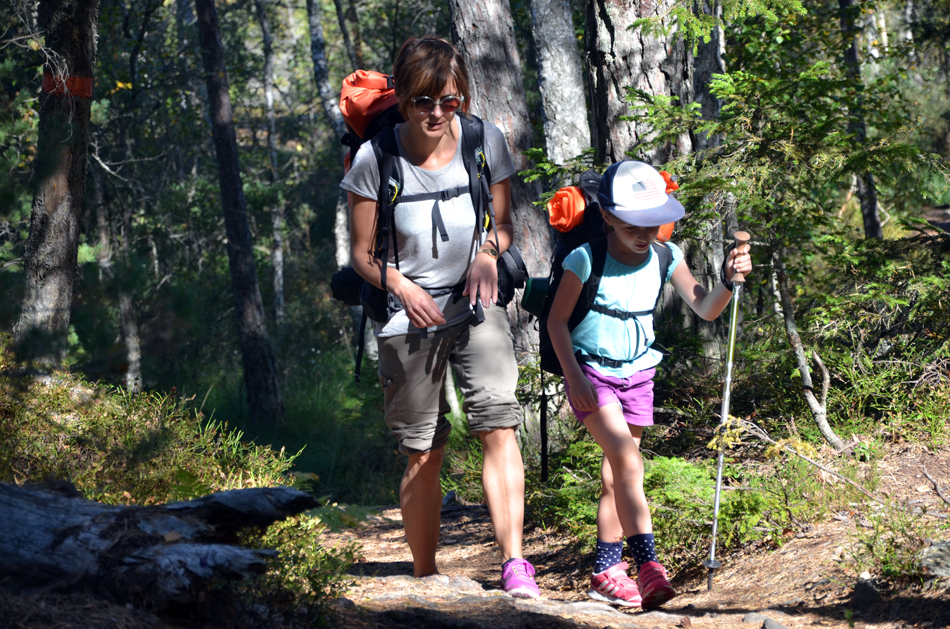 Golden time for a mother.

Sasha and Mathilde using a wood gas stove for the first time.