“We should go on a trip together” said Eric to me. “Sure, Let’s do it” I answered. Three years later, we did it.

Over a week end, Eric and I went on a micro adventure far away from home. We hiked a lot, paddled a lot, biked a little and drove too much. It turned into a sufferfest. But it was awesome.

We decided to do a traverse of Fulufjället national park that lies on the border of Sweden and Norway. In Sweden, nature is omnipresent but true wilderness will be found only inside national parks boundaries. We were looking for mountains and wilderness. Except in Sarek NP, there is nothing close to a mountain in Sweden, but it may be hilly sometimes. Fulufjället has hills (fjäll) and proper wilderness. So we went there. We just had a weekend window (see recap below for reasons), so we hopped on the car on a Friday afternoon and drove for 7 hours to get to Fulufjället.

The plan was simple: 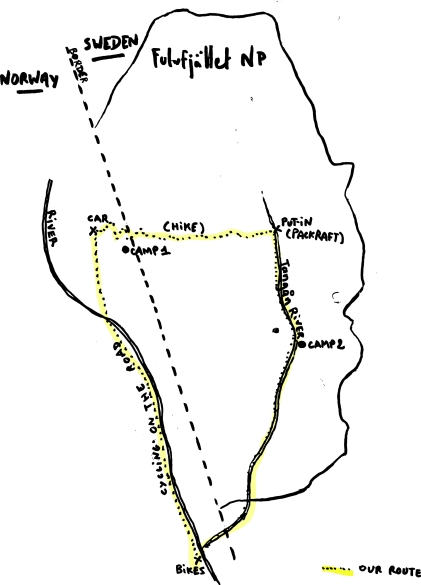 I think we crossed the Norwegian border at 10pm or something, dropped the bikes at the end of the river we were planning to packraft then left the car a bit further on the road. We started to hike at 11:21pm and stopped around 1:00am.

We found some sort of abandoned village that looked a lot like the river rat crib from The hill have eyes except it was in the middle of a forest, not a desert. With this reference in mind I freaked out a little bit but Eric thought it was picturesque enough and a perfect camping spot. Obviously he never saw that movie. And to be fair, it was a very nice camping spot. After a beer, we collapsed and slept the rest of the bright night like babies.

The following morning we woke up at 7 (feels like holiday for a father of four, right Eric?), packed our stuff, escaped from the horror movie set and went into the woods. We got lost after about five minutes, mostly because the Swedish map was accurate only on the Swedish side and we were in Norway. We bushwhacked for a couple of hours, trying to find our way into the park, using a smartphone as a compass (we packed enough booze to celebrate Spring Break in Cancun but we forgot to take a compass with us). Moose and bear droppings were everywhere, but apart from their fecal signature, no living wildlife was to be seen.

We crossed streams, marshes and rivers. We stopped sometimes for a sip of 12 years old Scottish single malt whisky. We eventually reached the tree line. Atop of the fjäll was a huge plateau, kilometers long. It literally took hours to cross it. It was cold, long and as boring as it sounds. But it was nice somehow, whisky helped.

I read in a book (yes, it still exists) that the oldest living tree was in Fulufjället, it’s supposed to be 9000 years old. We didn’t see it, but it’s also supposed to be pretty small and ugly.

We were also pretty ugly and tired when we reached our goal: a valley were the river Tangån starts. In order to prepare this trip, we looked at maps and google earth. This was the main river to go South and our best option for a long traverse of the park. The first glimpse of the valley we had was disappointing. No river on sight. We reached the bottom of the valley and saw a little stream. There it was. We followed this promising water flow that was growing “bigger” every time an other stream was joining it. After a while the water level was sufficient to operate our packrafts. To be honest, it wasn’t the Colorado river but it was just enough to keep our bums above the rocks. Water level was about 40cm and we hit the river bed more than often. But we encountered also some very nice rapids with small drops. You have to take my word for it since my Gopro failed to record and we had our cameras deep in dry bags.

It was true exploration. Loads of fallen trees, tough terrain. I guess not a lot of people paddled this river before. Since we focused more on beer than gear, I forgot to take my drysuit. And it was stupid. We had to walk, push the boat and portage, we were soaked all the time and the water was pretty chilly (some would say it was freaking cold). The elevation difference between the start of Tangån and its end is so big that it’s a continuous rapid all the way down. During the Spring flood I guess it should be amazing for a packrafter.

We stopped around 6pm and made camp on the shore. We were cold, soaked and tired. I was amazed by Eric’s appetite. He ate half a kilo of pasta by himself and was still hungry after that. When we woke up at 5:45am, we realized we camped in a bear restroom. Apparently some bear made this shore its favorite to drop some massive loads all over the place. At this point we were starting to look and smell like bears ourselves.

It was hard to get back into the cold river this morning. We still had no drysuit so we decided to wear only our waterproofs in order to spare our clothes we dried (and smoked) the evening before. Gore tex on the bare skin feels just about right, until you jump in a 10°c water. After 3 hours on the river we realized that we just traveled 5 kilometers. We still had 11 in front of us before the bikes. At this pace, we were going to spend the day in the water. We talked about it. Eric wanted to keep on paddling and I wanted to walk on the shore to kill some kilometers. We went for the walk. At this point Eric and I realized we did not have the same expectation on this trip. Not having a lot of opportunities to do this kind of trip, he wanted to make the most of it, even if it meant to arrive in Stockholm Monday morning and to go straight to work. And I was thinking that being home on Sunday night was mandatory in order to be in decent shape for the week. We eventually found an agreement and carried on. We crossed the Norwegian border again, found our bikes where we left them two nights earlier and cycled the last 25 kilometers back to the car. We drove back to Stockholm ( it took 7 hours) and made it home at 10:30pm.

We completed this traverse in 39 hours. I have no idea how many kilometers we traveled during this trip, not a lot I’m afraid, but the terrain was really tough so it’s really hard to go fast. It was pretty brutal, the whole day after we returned, I walked like C-3PO, not sexy. We used packrafts exactly the way they’re intend to be used: on a multi sport trip involving hiking, paddling and whisky. We added a little bit of biking for the fun. Overall it was awesome: we went through pristine nature, visited bear restrooms and explored some untouched rivers. What to ask more? A compass and a drysuit in the pack. Lesson learned.

Who the hell is this Eric?

Eric is my coworker and friends. He has four kids. Not everyone has four kids. Do you have four kids? I don’t have four kids, but I know him. And believe me, he has four kids (and a sauna). If I mention that, it’s because when you have such a bunch of offspring, going on a trip by yourself (I mean without the whole pack) is no easy plan. And basically, your life is kid centered and you have almost no time for personal projects. Also, he was born in the mountains, sailed in the Arctic, recently got back from Greenland and sport is his religion.